1. MPEG-G: leveraging the use of genomic information

The development and rapid progress of high-throughput sequencing (HTS) technologies has the potential of enabling the use of genomic information as an everyday practice in several fields. With the release of the latest HTS machines the cost of a whole genome sequencing for a human genome has dropped to merely US $1,000. It is expected that within the next few years such cost could drop to about US $100. Such achievements in the reduction of sequencing costs opened the doors to personalized medicine, where the genomic information of patients can be sequenced and analyzed as frequently as done today for standard blood tests. However, the ever-growing volume of sequencing data is already a serious obstacle to the wider diffusion of sequencing in public health. The associated IT costs, related to storing, transmitting and processing the large volumes of data, will soon largely exceed the costs of sequencing. The lack of appropriate representations and efficient compression technologies is widely recognized as a critical element limiting the potential of genomic data usage for scientific and public health purposes [1].

The MPEG-G standard is currently the largest coordinated and international effort addressing the problems and limitations of current technologies and products towards a truly efficient and economical handling of genomic information. MPEG-G utilizes the latest technology to compress and transport sequencing data for complex use cases that are currently not supported by existing formats. Notable use cases addressed by MPEG-G include:

This white paper summarizes the objectives and the benefits of the upcoming MPEG-G standard by providing:

2. Development of the MPEG-G standard

In its 30 years of activity ISO/IEC JTC 1/SC 29/WG 11 – also known as Moving Picture Experts Group (MPEG) – has developed many generations of successful standards that have transformed the world of media from analog to digital. Video, audio compression and transport technologies, as well as application formats and APIs, have provided the standard support enabling the interoperability and the integration we all witness in the digital media field.

ISO TC 276 has recently been established to work on the standardization of biotechnology processes including analytical methods (Working Group 3) and data processing and integration (Working Group 5).

MPEG, as developer of generic standard technologies is working with ISO TC 276/WG 5, integrators of biological data workflows, to produce a new open standard to compress, store, transmit and process sequencing data: MPEG-G. The standard will offer high levels of compression, approximately 100 times compared to raw data, i.e. more than one order of magnitude than possible with currently used formats [2]. Furthermore, the MPEG-G standard will provide new functionalities such as native support for selective access, data protection mechanisms, flexible storage and streaming capabilities. This will enable various new applications scenarios, such as real-time streaming of data from a sequencing machine to remote analysis centers during the sequencing and alignment processes.

Today, a single sequencing system can deliver the equivalent of 18,000 whole human genomes per year, which accounts for almost 5 PB of data per year. This leads to the forecasts that the amount of genomic data is expected soon to surpass astronomical data in volume [3]. The efficient storage and transmission of genomic data is thus becoming of utmost importance.

Motivated by this demand, MPEG and ISO TC 276/WG 5 have been analyzing the main stages of typical genomic information processing since July 2014. The work produced a list of requirements to be satisfied for achieving an efficient compressed representation of raw and aligned reads produced at the initial stages of processing pipelines for genomic information, as well as a list of requirements for the efficient transport of and for the selective access to the compressed genomic data.

In the meantime, an increasing consensus had been rising in the scientific community around the notion of quantized transmission of the metadata (i.e. quality values) generated in very large volumes by sequencing machines [4], [5]. Therefore, additional requirements for solutions that address calibrated and quantized compressed representations of such metadata were identified.

The process of identifying all requirements of a standard to address and solve the various challenging problems of HTS data processing was a wide interdisciplinary effort grouping experts from different domains including bioinformatics, biology, information theory, telecommunication, video and data compression, data storage, and information security. The identified requirements that were the baseline for the development of the MPEG-G standard are available in full detail in the public document N16323 (MPEG)/N97 (ISO TC 276/WG 5).

MPEG-G has been developed following the rigorously open process adopted by MPEG for its standards. A Call for Proposals was issued in June 2016 and 15 responses were received from 17 companies and organizations. The technologies in the responses were evaluated using several criteria, including compression performance and separate assessments for each type of genomic data: sequence reads, quality values, read identifiers, alignment information, and associated metadata. In addition, computational complexity in terms of encoding and decoding times and memory usage was also assessed. The support of a minimal functionality backing non-sequential access, extended nucleotide alphabets, encoding of additional metadata (extensibility), and quantized coding of metadata was also considered in ranking the received proposals.

The most valuable technologies were integrated in the standard to provide the following three classes of functionality: 1) the compression of genomic data generated by sequencing processes, 2) the compression of genomic data associated to alignment information, 3) the definition of a Genomic Information Transport Layer that supports storage and transport functionality.

The standard intends to provide the foundation for interoperable genomic information processingapplications enabling the use of genomic data on a large scale. ISO/IEC is also engaged in supporting the maintenance of the standard to guarantee the perenniality of the applications using MPEG-G technology. A list of the essential features of the MPEG-G technology is the following:

MPEG-G technology provides storage and transport capabilities both for raw genomic sequences and for genomic sequences mapped onto reference genomes. Moreover, MPEG-G provides support for complex use cases that are currently not supported by existing formats.

Genomic Records are aggregated and encoded in structures called Access Units. These structures are units of coded genomic information that can be separately accessed and inspected. An illustration of the essential elements, including Access Units, of the MPEG-G file format is shown in Figure 3 and in Figure 4.

Figure 3. Illustration of the essential elements of the MPEG-G file format. Multiple “Dataset Groups” include multiple Datasets of sequencing data. Each Dataset is composed of Access Units containing only one Data Class. Each Data Class is composed by Blocks of Read Descriptors. 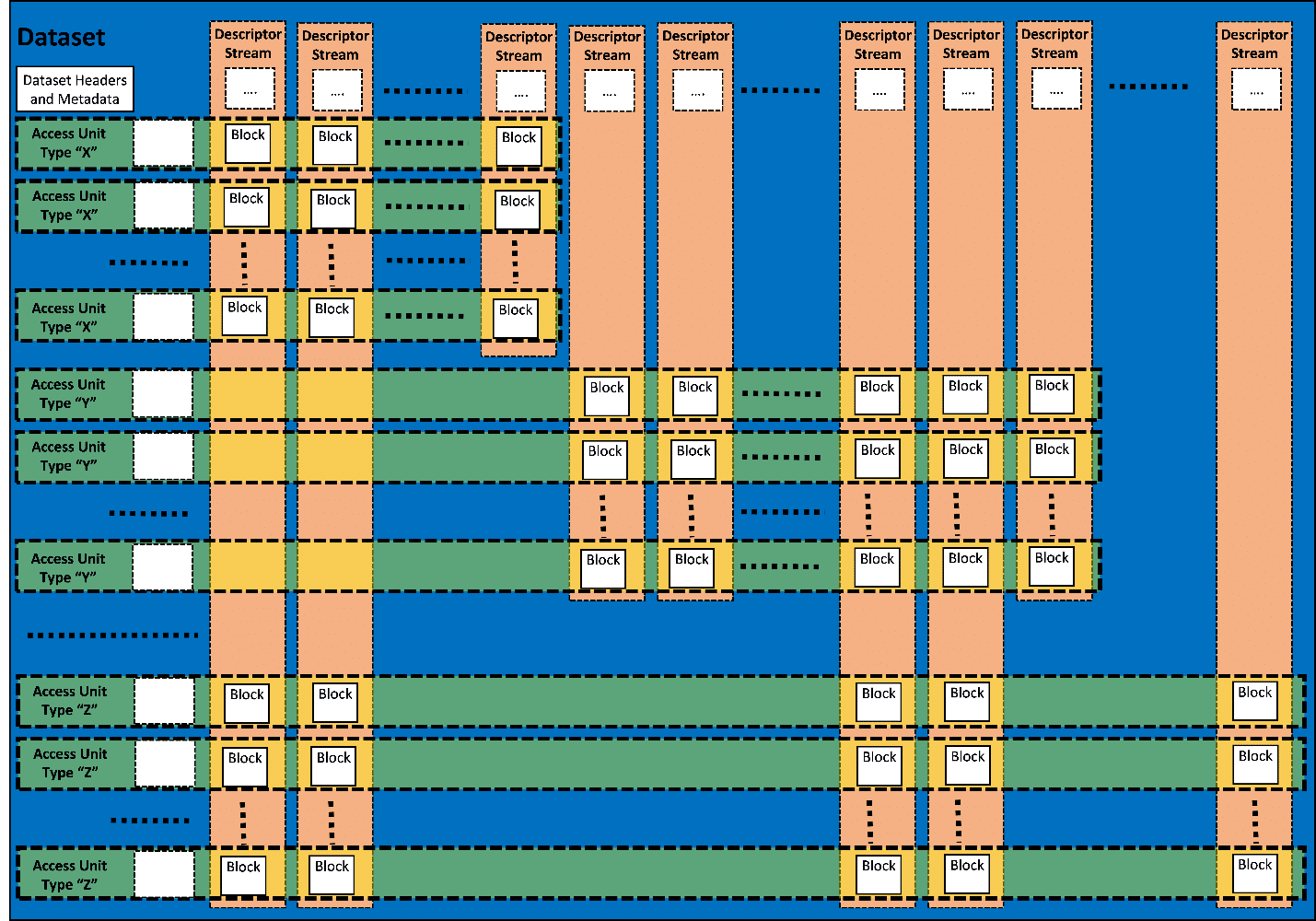 Raw sequence data can be encoded in an MPEG-G file with two main objectives:

Differential coding of raw genomic sequences relies on the identification of common patterns (i.e. “signatures”) shared among several sequences. These common patterns are encoded only once together with the nucleotides specific to each read (i.e. the “residuals”). The presence of such signatures enables the implementation of indexing schemes whereby the compressed data can be searched by means of patterns matching algorithms.

Genomic sequences mapped onto reference sequences can be compressed in an MPEG-G file following two approaches:

Genomic Records are classified into six Data Classes according to the result of the primary alignment(s) of their reads against one or more reference sequences as shown in Table 1.

Records are classified according to the types of mismatches with respect to the reference sequences used for alignment.

MPEG-G supports the description of alignments contained in Genomic Records by exposing the following information at the Access Unit level:

The indexing tools embedded in an MPEG-G file enable the following types of selective access that can be combined in the same query:

MPEG-G supports the packetization of compressed data for transport to receiving devices that can start processing the data before transmission is completed. The main features of MPEG-G streaming are:

An illustration of the essential components of the MPEG-G transport format is shown in Figure 5.

Figure 5. Illustration of the essential components of the MPEG-G transport format.

5. Usage of the MPEG-G standard

The MPEG-G specification is not limited in scope to syntax, semantics and decoding process specifications, as it also comprises normative Reference Software and Conformance testing.

The entire specification opens a wide range of possible usage scenarios and applications for the MPEG-G standard. New tools could be developed, and existing tools could be improved using the new technology. This new combination of tools can be the start of entire genomic ecosystems fueled by MPEG-G, as depicted in Figure 6. These tools could include retrieving, searching for, manipulating, or adding genomic information elements – such as headers, information metadata, protection metadata, chromosomes, genes, parts of the previous structures, and many more –  based on the concepts specified and supported by the MPEG-G standard. 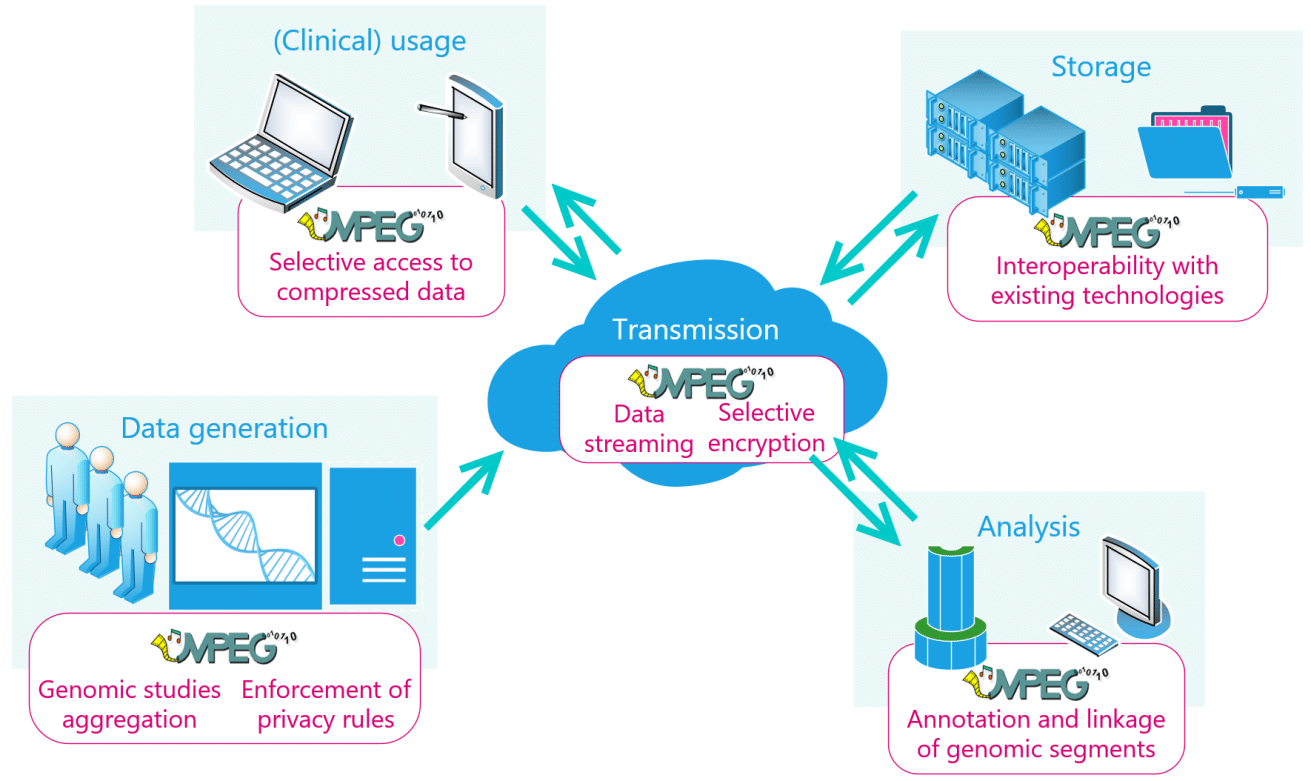 Thus, although the Reference Software is considered normative in terms of the semantics of the decoding process, it does not add anything to the textual technical specification of the MPEG-G standard. It has also to be underlined that being its objective to support the specification, the Reference Software has not to be intended as an efficient implementation of an MPEG-G standard decoder to be used as a benchmark of performance for sequential or parallel implementations.

Finally, the MPEG-G standard includes Conformance. This part of the standard is fundamental in providing means to test and validate the correct implementation of the MPEG-G technology in different devices and applications and the interoperability among all systems. Conformance testing specifies a normative procedure to assess conformity to the standard on an exhaustive dataset of compressed data: every decoder claiming MPEG-G conformance will have to demonstrate the correct decoding of the complete Conformance testbed.

We use cookies to ensure that we give you the best experience on our website. If you continue to use this site we will assume that you are happy with it.OkPrivacy policy