MPEG-G: Enhancing EHR with the all-in-one-place format for genomics

Medical records are the backbone of medicine nowadays in battling diseases. Over the past decades, Electronic Health Records (EHRs) have been developed to support physicians and health insurance in efficiently collecting and connecting patient data for more stringent medical progress. With multiple goals, including gaining a more wholesome overview of a patient’s health and making the exchange of data between the physicians, hospitals, laboratories and insurance faster and more accessible. 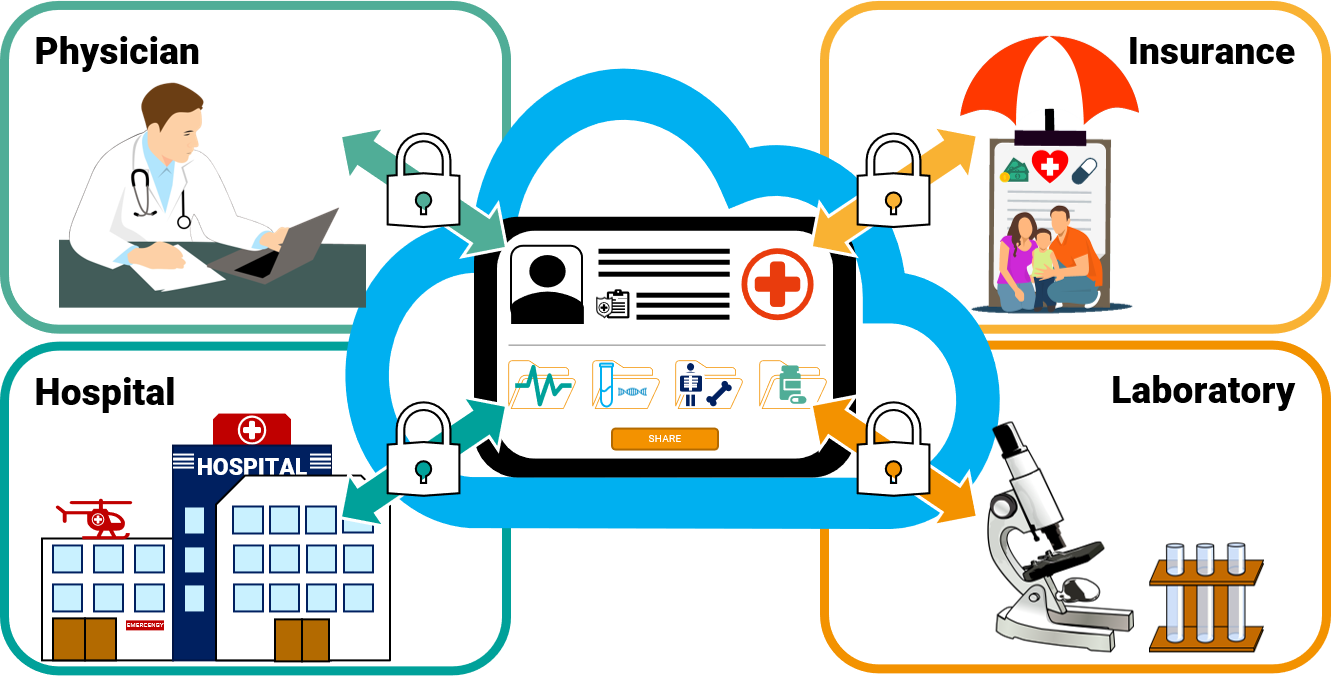 But the reality is slightly different today from the initial declared benefits of EHRs. Today’s needs have changed since the 1960s and 1970s when the fundament of transforming paper records into electronic ones was laid out. Maybe the support from the genomics field and a new unique data standard could provide the missing interoperability needed to accelerate the transformation

In the following we would like to explain further how EHR evolved, what are currently the challenges and how could an ISO standard in genomics – developed by the MPEG group – could support EHRs in the future.

History of EHR and what challenges exist today?

The earliest medical records date back to the ancient Egyptian times 1’600 – 3’000 BC however the steady use of paper medical records was in the early 20th century to treat patient in a long-term sense. The idea for transforming all the generated data on paper into electronic databases came up in 60s and 70s of the past century.[1] Back then developments focused on two objectives: collecting data in hierarchical or relational databases for the purposes of hospital billing and scheduling and clinical systems to support the medical care and research process.[2]

It was until 1992 when the inadequacies of paper records became more and more obvious which led to considering a complete conversion to electronic health records as advocated by the Institute of Medicine. Still with costs for hardware dropping the widespread use of EHRs was delayed by large initial costs, data entry errors, poor initial physicians’ acceptance, and lack of any real incentive.1 These circumstances then forced to rethink a complete conversion to only complement and not replace paper records.[3]

Today – especially in the US – EHRs have been more or less well established in the routine work in health care but are still lacking better compliance with standards and information security. There have been enormous advancements that have taken place in relatively short time period, but many of the early expectations for EHRs have not been realized and current EHRs still do not meet the needs of today’s rapidly changing healthcare environment.1

Figure 2 – Comparison of the expectation for EHRs in 1992 and 2015. It shows that Electronic Health Records are possible broadly, including lifelong patient data to be transmitted quickly, reducing administrative costs and improving patient care. However, the application is still not fully adopted due to difficulties in data privacy and, most of the time, a user-unfriendly interface. This is also why duplications still occur, and due to the multitude of formats, the use of EHRs and conversion is losing the physicians time rather than saving it. (Legend: green = more or less realized, orange = partially realized and red = not yet realized)

One of the key elements still missing is the ability of physicians and hospitals to share data – with other physicians and providers, care managers, patients, and other software applications due to a lack of interoperability. Some experts claim that the current EHR system only converted paper records to digital ones, meaning the data remains trapped in silos. This so crucial exchange of data still faces technical, operational and financial challenges.[4]

In this context, the Health Level Seven International (HL7) working group was established in the late 80s. Their purpose was and still is to provide a comprehensive framework and related standards for the exchange, integration, sharing, and retrieval of electronic health information that supports clinical practice and the management, delivery and evaluation of health services.[5] A data interoperability resource called Fast Healthcare Interoperability Resources (FHIR) was developed and published in 2013 to support data exchange between healthcare software systems.[6] All in the quest to “upgrade” EHRs to the initial core focus of making the crucial data exchange in medicine more interoperable and thus practical.

So, the central focus now lies in the standardization of formats to enable secure data exchange that allows hospitals and physicians to share medical information from patients to improve overall care. In this holistic approach also falls the results of genomic testing. The genomics field is one of the critical drivers for generating vast amounts of medical data. Even more so, as the sequencing approach has shifted over the last two years towards the broader scope of Whole-Exome Sequencing (WES).[7] This approach now generates gigabytes instead of megabytes for each patient dataset. Big Data is not anymore just a relevant topic for astrology or the entertainment industry but is clearly an essential challenge in genomics.[8] Therefore, MPEG-G was developed – as it is typical for any other ISO standard – to provide a standard that can deal with a vast amount of data and still ensure a high degree of interoperability in a standardized and easy to follow way.

MPEG-G (ISO/IEC 23092) is a series of ISO international standards for the representation of genome sequencing data and associated metadata. This new standard was developed by the Moving Picture Experts Group (MPEG), one of the most prolific ISO working group with more than 1’700 delegates from over 40 countries worldwide. This group has been developing globally used digital media encoding, transmission, and processing standards for more than 30 years. Any individual or organization can join the ISO/MPEG-G working group to keep the spirit for an open standard truly alive.

How can MPEG-G enhance the interoperability in EHRs

MPEG-G’s genomic testing data contains relevant information for the EHR such as for example the Variant Report and vis versa previous indication that can help in the analysis and interpretation. For this matter it will be important to establish early on a standard clinical data linkage for these different data formats to exploit the full potential of electronic medical records.

The way how MPEG-G is set up is ideal to provide a docking point to establish such a linkage. The linkage information can be stored directly within a MPEG-G dataset as metadata or linkage attributes, to indicate the availability of additional clinical data in external repositories along with specifications on how to access this data for specific samples. By making linkage information an intrinsic part of an MPEG-G dataset, it ensures the ready support for clinical data exploration and the linkage information will not be lost during file transport or system migration. This makes it easier to access data from multiple external data repositories associated with a specific sample, such as electronic health record (EHR) systems, hospital information systems (HIS) and laboratory information systems (LIS) which may be supporting different data exchange standards or vendor specific solutions, such as HL7, FHIR and others.[9]

Video 1 – MPEG-G’s interoperability feature, due to its container structure, can include metadata and attributes for the linkage of different EHRs systems and thus – for genomic purposes – can deliver the needed interoperability for medical data.

All of our solutions run natively in MPEG-G, making them the ideal entry points for genomics labs to take advantage of this new unique and efficient genomic standard.

The CE marked GenomSys Variant Analyzer is natively running on the MPEG-G format and allows converting FASTQ data seamlessly, coming directly from the sequencing machine, into MPEG-G before each analysis. It is the worldwide first genomic software that uses the MPEG-G format to enable laboratories and researchers worldwide to leverage the high interoperability feature of the ISO format.

By using GenomSys Variant Analyzer, the entire analysis pipeline, including steps working on aligned data, can take advantage of all its features, from compression to Selective Access, thus minimizing the overall processing time and the storage and memory footprints as well as its single syntax for an easier way to share data with research colleagues.

Combining GenomSys MPEG-G Toolkit with GenomSys Variant Analyzer allows for a faster analysis as the smaller files save transmission time and hence fewer costs. GenomSys helps organizations handle large amounts of genomic data to store them cost-efficiently and be equipped for the new era of genomic analysis with an ever-increasing volume of data.